Richard Widick is a Sociologist and Visiting Scholar at the Orfalea Center for Global & International Studies at UN Santa Barbara, where he participates in the Environmental Justice and Climate Justice Studies Research Hub (EJ/CJ).

he nations of earth have collectively recognized that global warming and climate change require an international response.

In the interest of supporting and deepening that response, I think that educators and students need to bring these efforts into the classroom with as much urgency as possible.

To that end, on this Topic page I try to deliver everything you need as educators or students to begin developing your own critical educational initiatives and join the effort.

As a sociologist conducting field research in this arena for over 20 years, I bring terabytes of data and scores of hours of audio and visual documentation to the table, as well a few insights into integrated methods for research, publication and teaching about the struggle to govern in the service of environmental and climate resiliency.

The first and biggest problem for teaching global climate governance is complexity, so it is important to begin by narrowing the topic down.

For our purposes, the generic term global climate governance will be used to indicate the collective response of human societies to produce self-governance of the unfolding climate crisis.

This collective response can be understood as an emergent compromise formation of opposing social forces that can be broadly described as emerging from three reciprocally determining but relatively independent spheres of everyday modern life:

For my purposes here, emergent global political sphere of climate governance specifically refers to the institutional spaces created and managed by:

In May of 1992, the UN General Assembly adopted the text of the United Nations Framework Convention on Climate Change, and they opened the Convention for signing at the Rio Earth Summit in June of 1992.

On March 21, 1994, the UNFCCC entered into force, and the UNFCCC Conference of the Parties (COP) to the Convention have been meeting every year since COP 1 in Berlin, in April 1995.

With my climate research partner John Foran (Professor of Sociology at UCSB and NXTerra co-director), I started my research on this international experiment in global climate governance at COP 17, Durban  South Africa 2011, at which I represented the University of California as an Official Observer Delegate for the first time.

In that year, the UNFCCC launched the so-called Ad Hoc Working Group on the Durban Platform for Enhanced Action (ADP), the process that delivered the 2015 Paris Agreement on Climate Change.

I have been at every COP from 2011 to 2018 in that same official but autonomous capacity.

The IICAT website was and remains our primary research archive — a public file cabinet with which we share our sources and publish our work.

IICAT is a methodological experiment in conflict-seeking participatory ethnography and visual documentation — a tool for participating in the UN climate talks and engaging with the scholars, intellectuals, activists, politicians and business folks who gather each year inside the COPs as well as outside, in the streets.

EJ/CJ is constituted by 11 UCSB scholars and six so-called Constituent Projects, each of which is organized by EJ/CJ scholars.

The KAN met and brainstormed the problem of teaching in climate change, and decided a powerful engagement with the concept and practice of climate justice was necessary.

In 2017, Foran and Sarah Ray (Professor of Environmental Studies and NXTerra co-director) and I proposed UC-CSU NXTerra as the next step toward shaping the study of climate change, critical sustainability, and climate justice, a tripartite conceptual attempt to capture what we see as crucial streams of related knowledge-creation (discourses) that can help us transform the way educators from both of California’s flagship public university systems think, act, and teach about the unfolding climate crisis.

A key component of the educational transformation we envision is bringing the global efforts to regulate/govern what I call carbon maldevelopment—to bring the extractive fossil fuel culture of corporations, private interests, public interests, and nations into the realm of democratic governance, and thus under the purview of climate science—what we know to be true, and thus what we know needs to be done.

History of Global Climate Governance — QUICK LINKS for the Classroom

UNFCCC Timeline — Key Milestones in the Evolution of Climate Policy

The UN Report on the Human Environment

The UN’s 1982 World Charter for Nature

The UN’s 1992 Rio Earth Summit (THE RIO EARTH SUMMIT:
SUMMARY OF THE UNITED NATIONS CONFERENCE
ON ENVIRONMENT AND DEVELOPMENT, by Stephanie Meakin,
Science and Technology Division, 1992)

The Earth Charter Initiative (EHI) a project of the UN, UNESCO, and University for Peace.

— Certificate On Education for Sustainable Development

KEY DOCUMENTS for the Classroom

1987 – Our Common Future: Report of the World Commission on Environment and Development

Climate Science: This is what we know, and it comes inscribed with forces compelling us to act in the service of truth, first of all, and to achieve certain valuable outcomes, for example — a just and livable future on an environmentally friendly planet fit for human habitation.

This is how economic activity produces and reproduces the social and environmental conditions for human life, as well as a number of external, unintended consequences, chief among which for our interests here is climate change.

In the same vein, critical theoretical economic analysis should treat all economic activity as beginning in the appropriation of nature in and through a specific form of society.

From this perspective, there is no such thing as economic production in general, only every historically and materially specific action by which human beings direct their attention at the world (nature) and transform some piece of that world into something of value, claiming that valuable thing for themselves (or some group) in the process.

PUBLIC SPHERE SPEECH, COMMUNICATION, AND ASSEMBLY: This is how we talk about what we know.  It refers to the impact of climate science in the public sphere, including but reaching beyond the academic sphere:

CLIMATE GOVERNANCE: This is how climate policy is made.  It refers to the policy making at every scale, local, municipal, state, region, territory, nation, and global. Here we provide links to explore this local to global scale from Santa Barbara:

After World War 2, and in the interest of preventing further catastrophic conflicts between the nations, the victors of the war set up the United Nations as a world deliberative body intent on establishing the principle of global environmental governance—and these victors went on to build the UN system in their own image.

By adopting the Universal Declaration of Human Rights, as well as the UN Charter, the UN ensured that all further deliberations would occur under the auspices of liberal political science, with input from stakeholders rooted in three relatively autonomous rights-based and rights-driven spheres of social life:

2) the public sphere: individuals and voluntary associations individuals and groups of every type, including economic agents, speaking and assembling for self-education and preparation to participate in the economic and political spheres

3) the political sphere: this is the sphere of governance in which all parties struggle for

Each of the three spheres can be quickly identified in the UN Charter, the UN Universal Declaration of Human, the United Nations Framework Convention on Climate Change, and the Paris Agreement—these are founding documents (speech) that called into being and action the current regime of global climate governance, as it has been achieved to date.

This “Three Spheres” analysis of emergent global governance is useful for teachers and students because it identifies how modern governance, to the extent that it is modern, legitimates itself as self-governance by following collectively self-established rules guaranteeing individual rights of free speech and assemble, property ownership, and political participation.

The following films and videos are presented here as teaching resources because they can be used in the classroom to demonstrate the value of the “Three Spheres” analysis and fertilize discussions about emergent global climate governance.

In this clip from Climate Justice (Richard Widick, MGP 2019, post-production), I highlight the profound ways in which the economic forces dominate and inhibit both public and political forces engaged in emergent global climate governance.

The following videos are useful classroom tools for showing how voluntary organizations and individuals from civil society increase their value as stakeholders in the Paris process.

The first video is produced by the UNFCCC itself and explains how all peoples and all groups are invited to interact engage in the process and help make sure it embodies the interests of all stakeholders.

The second video is a powerful example of how much expertise and prescient analysis can help clarify the complex problem of apportioning ‘fair shares’ of the massive burden that global warming and climate change.

Climate Action and the Responsibility of the Rich, ActionAid USA 2019

DETAILS: Join Brandon Wu, Director of Policy and Campaigns at ActionAid USA, and Sivan Kartha, Senior Scientist at the Stockholm Environment Institute, to talk fairness in global climate action. What does ambitious climate action look like for rich countries who have done the most to cause the climate crisis compared to countries who have done the least?

FILM:  Climate Deadline (Richard Widick, IICAT Films, MGP 2015).  I released this film on October 9, 2015, on the eve of the UN climate talks in Paris at which the Paris agreement was adopted.

Youth Empowerment & Participation in the United Nations Climate Talks via YOUNGO: Youth Constituency to the UNFCCC

DATABASE:  CLIMATE CHANGE LAWS OF THE WORLD — Grantham Research Institute for the Study of Climate Change and the Environment, London School of Economics

HISTORICAL TIMELINE OF THE CONVENTION

MENU OF NASA SOURCES FOR IMAGES and DATA USEFUL FOR ILLUSTRATING and FRAMING CLASSROOM DISCUSSIONS OF CLIMATE SCIENCE and GOVERNANCE:

MENU OF FOUNDATIONAL SCIENTIFIC BODIES & INITIATIVES  ON WHICH EMERGENT GLOBAL CLIMATE AND ENVIRONMENTAL GOVERNANCE BUILDS ITS ANALYSES AND POLICY RECOMMENDATIONS:

IPBES – The Intergovernmental Panel on Biodiversity

MENU OF CLIMATE LAW and GOVERNANCE

This 59 second video is essentially a commercial for the UN climate talks, published by the UNFCCC’s climateconference YouTube channel.

This webinar was put together to help participants navigate the UNFCCC and COP24. View the presentation to learn how to effectively participate in and observe the UNFCCC COP negotiations in Katowice, Poland. Highlighting the organizational and decision-making structure of the meetings, speakers share tools and resources to facilitate attendee’s navigation of the COP space both in person and online. While this webinar is targeted to the Research and Independent NGOs (RINGO) constituency group, all COP attendees will find it useful. 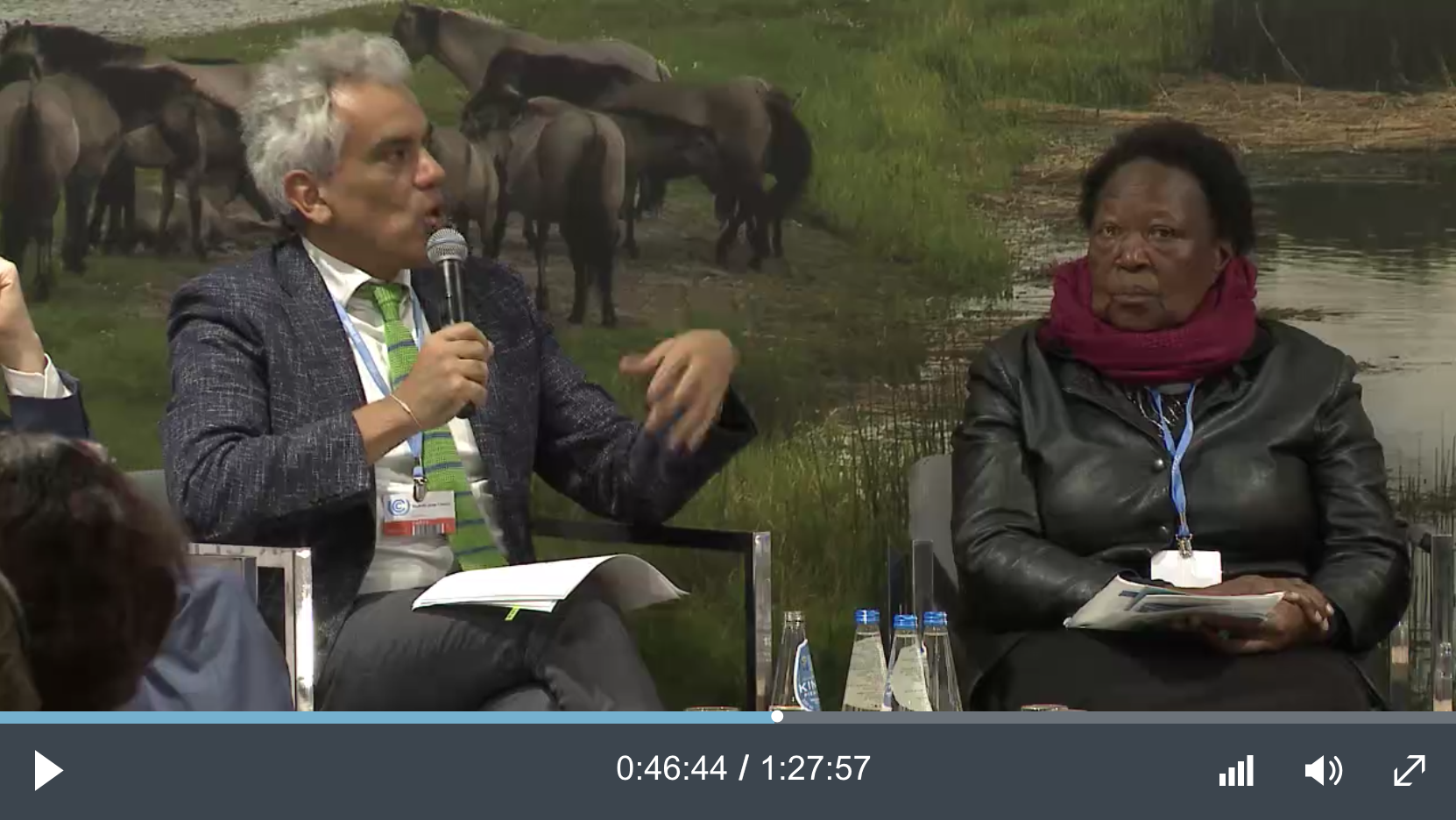 An historic pact to combat climate change and unleash actions and investment towards a low carbon, resilient and sustainable future was agreed by 195 nations in Paris. See the best moments of COP21.

Here the UNFCCC puts its best face forward, displaying the official narrative of the conclusion of the Paris process and adoption of the 2015 Paris Agreement on Climate Change.

Useful in the classroom for documenting the physical space of the historic talks, introducing many of the great personalities, showing the many heads of state and global dignitaries in attendance that helped establish the universal importance of the event.

The International Response to Climate Change: Perspectives from within the UN System – Mark Radka, Chief of Energy and Climate at the UN Environment Program

At the 24th meeting of the Parties to the UN Climate Change Convention, governments completed the so-called Paris Rulebook, the set of guidelines for implementing the Paris Climate Change Agreement, and attention is shifting to implementation of measures that cut greenhouse gas emissions. Mark Radka, Chief of the Energy and Climate Branch at UN Environment, describes how the UN works with countries, companies, and people to reduce the emission of greenhouse gases. Recorded on 04/08/2019.

Can we hack climate change to save us all? – Foreign Correspondent (ABC News, Australia, 2017, 60 min)

Foreign Correspondent is the prime-time international public affairs program on Australia’s national broadcaster, ABC-TV. We produce half-hour duration in-depth reports for broadcast across the ABC’s television channels and digital platforms. Since 1992, our teams have journeyed to more than 170 countries to report on war, natural calamity and social and political upheaval – through the eyes of the people at the heart of it all.